I do keep Windows (11 in my case) and any C# related framework (.NET Framework and .NET Core) always very up to date. You could try to see if you are running the latest versions of the runtime.
0
Glitch7
2022-05-11T20:38:09Z - 2022-05-11T20:38:09Z ago
#5
Also Andy, it might help to know what you were doing prior to leaving WL8, which streaming provider, etc. Maybe there's a disconnected websocket or something that's causing this at your end.
0
superticker7
2022-05-11T23:17:24Z - 2022-05-11T23:17:24Z ago
#6
Clearly you have a WPF window sucking CPU time. It's even sucking GPU time according to your screenshot, so it's definitely a window causing the problem. But you never told us which window is the culprit so we can't troubleshoot it. Help us help you. Start closing child windows until the CPU time drops and report which child window is running without cause.

Also this runaway window might be from one of the WL extensions (and one of its windows). I would start uninstalling the extensions until the problem goes away.

Finally, I would see if there's an update to your video drivers for Windows 11 since they are directly involved. There maybe a bug in the video driver, but you need to determine which WPF call is leading to the video driver not returning control back to the OS like it should before you can report it to the video card manufacture.

Can you confirm this is not a problem with WL7 on the same machine?

As you can see from my screenshot below, my workstation doesn't have this runaway video problem (but it's not Windows 11 either). I'm running .NET 6.0.4 for x64 Client and WL8 Build 5.

The WPF thread is always in Running mode. Based on Superticker's suggestion, I did the following:

- On closing one of the C# coded strategy windows, the WPF thread went to Wait:WrLpcReply mode and CPU usage drop from 15% to around 8%. 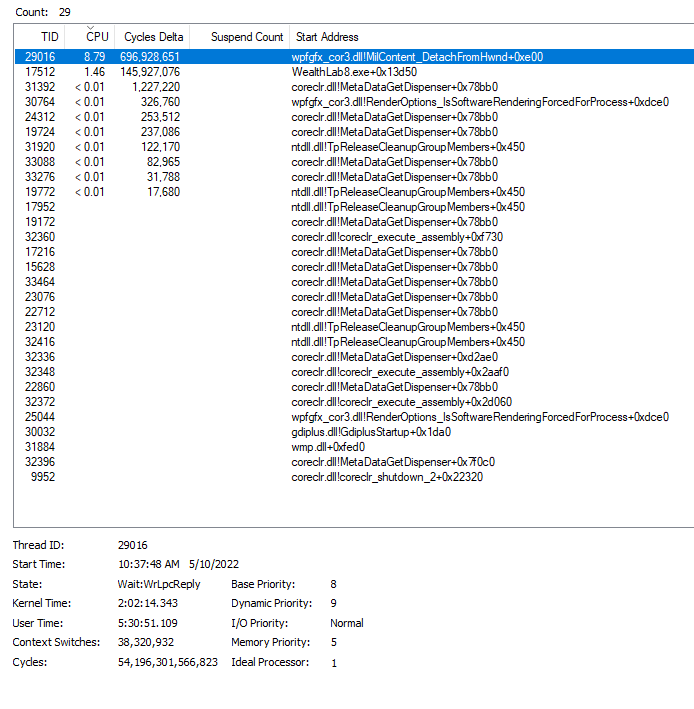 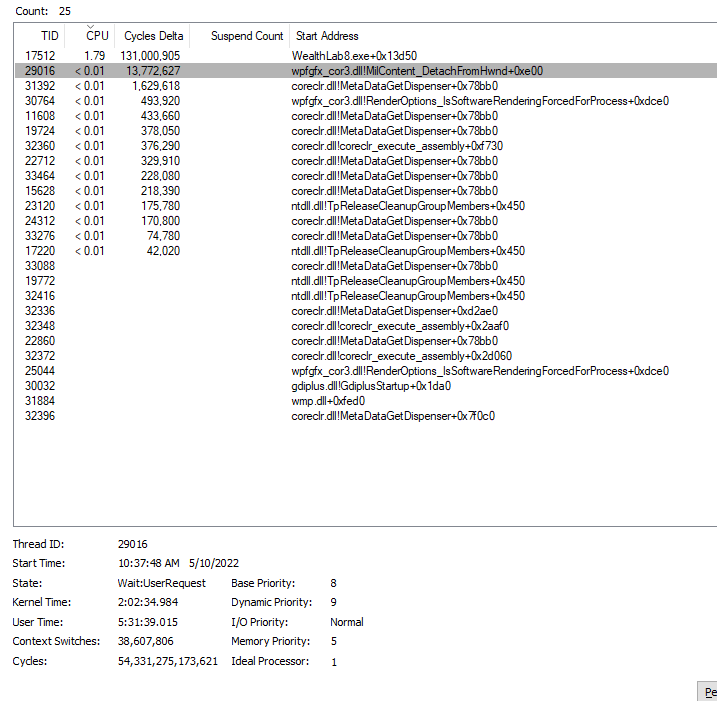 It looks like combination of strategy window charts and WL8 home page is causing the CPU usage. Symbol Equity chart causes increased GPU usage. If there is no streaming or no active running strategies, then I think the CPU/GPU usage should decline after chart has been loaded and left open but idle.
0
Glitch7
2022-05-12T00:53:06Z - 2022-05-12T00:53:06Z ago
#8
There are many elements in the Strategy window, including some potentially animated ones, so I think the modest idle CPU is not something we'll be able to do anything about. Best practice is of course closing WL8 before retiring for the night.
0
superticker7
2022-05-12T02:50:06Z - 2022-05-12T02:50:06Z ago
#9

QUOTE:
On closing one of the C# coded strategy windows, the WPF thread went to Wait:WrLpcReply mode and CPU usage drop from 15% to around 8%.

Generally speaking, the WPF thread should be in some kind of wait state. If it's not, that doesn't sound right. But do appreciate any animation "may" bring it out of that wait state.

I'm afraid the failure of the WPF thread to return to its wait state may be a video driver problem. We typically see Windows drivers as being highly optimized. But the exception is with new releases; in this case Windows 11. Understand there is great pressure to get the new product out the door, and since drivers are tough to optimize (especially video drivers), they are the last to get tweaked.

When the video drivers are fully optimized for Windows 11 (over the next 18 months), the WPF thread should remain in a "wait state" most of the time. Happy computing.
1
jheffez7
2022-06-29T10:05:30Z - 2022-06-29T10:05:30Z ago
#10
I'm seeing the same issue as the original entry. After loading WL8 my laptop start to run hot and the fans kicks in loud. A few minutes after closing WL8 the laptop fans gets silent and the laptop is much cooler.
The laptop almost never gets hot and I hardly hear the fans. Until I start WL8. After a trading day the laptop is hot!

QUOTE:
I'm seeing the same issue as the original entry

Well, this is the only configuration combination that's causing this problem. Try installing WL7 on your Windows 11 system and see if the problem goes away. There was a big change between WL7 and WL8 with the WPF video rendering, so if WL7 fixes the problem, that would narrow it down to the new WPF display package WL8 is using to support dark screen mode.

QUOTE:
I'll try to use resource monitor to figure out what's going...

Some additional points:
1) The CPU usage is highest when the Chart tab is selected, less with others tabs.

Yes, I kind of figured this might be the case. Can you tell us what video hardware you are running? And is this on Windows 11?

@Glitch: Is the new WPF display package on WL8 using any DirectX calls? If so, I would disable that because the device drivers for DirectX are more problematic. Just avoid DirectX altogether. WL isn't doing any real-time animation, so you don't need DirectX. The "standard" video that uses the standard video drivers will be more reliable.

QUOTE:
We don’t have any control of any kind of “WPF Package”.

I thought WL8 was using a third-party package to implement dark screen mode. So you're saying the only change is from Core 3.1 to .NET 6.0? Well, .NET should just be using standard video calls, not DirectX. Right? So that shouldn't be an issue.

The reason I know this is a video driver issue, other than the screenshot given in the original post (which is damming), is because no Windows 10 (or 7) user is experiencing this problem even though they are using the same application code base.

What would be useful is if Windows 11 users would post more about their video hardware, especially the video chipset employed with the problem. The video drivers are tied to that video chipset, so we would be able to identify which video driver is the culprit.

That's interesting. A Windows 10 user has this problem. Is it in the WPF routines? Have you updated your video drivers since .NET 6.0 was released? And you're running .NET 6.0.6 (or better)?

I'm running Windows 7 and don't have any problems; I'm running .NET 6.0.6. But my system isn't running the more advanced GPU processors either. At any rate, this is somehow hardware related. With the same application code base, some hardware platforms are more vulnerable than others. However, it's very troubling to learn both Windows 10 and 11 have this problem because they would be using different video device drivers. Moreover, the Windows 10 video drivers would be mature enough to not have a latent bug like this; such a bug would be fixed by now unless .NET 6.0 exposed a new vulnerability.

If this is .NET 6.0.X related--and it seems to be--perhaps a Microsoft TechNet forum may be discussing this WPF issue in better detail.
0