finantic.Optimizers
A collection of Optimizer algorithms and Optimizer Visualizers for Wealth-Lab 7.
$89.95 / Lifetime
Try before you Buy! Download the Extension for a 14-day free trial before purchasing.
(all Extensions require a Wealth-Lab Subscription)

Simple grid search that tries all combinations of the provided parameters.

Particle Swarm optimizer (PSO). PSO is initialized with a group of random particles and then searches for optima by updating generations. In every iteration, each particle is updated by following two „best“ values. The first one is the best solution found by the specific particle so far. The other „best“ value is the global best value obtained by any particle in the population so far.

Globalized bounded Nelder-Mead method. This version of Nelder-Mead optimization avoids some of the shortcomings the standard implementation. Specifically it is better suited for multi-modal optimization problems through its restart property. It also respect the bounds given by the provided parameter space.

Bayesian optimization (BO) for global black box optimization problems. BO learns a model based on the initial parameter sets and scores. This model is used to sample new promising parameter candidates which are evaluated and added to the existing parameter sets. This process iterates several times. The method is computational expensive so is most relevant for expensive problems, where each evaluation of the function to minimize takes a long time, like hyper parameter tuning a machine learning method. But in that case it can usually reduce the number of iterations required to reach a good solution compared to less sophisticated methods.

Implementation of the SMAC algorithm. This approach constructs explicit regression models to describe the dependence of target algorithm performance on parameter settings. This paradigm is extended to general algorithm configuration problems, allowing many categorical parameters and optimization for sets of instances. SMAC selects configurations based on a model rather than uniformly at random.

Parameters and Metrics is an Optimization Visualizer Exrension for WealthLab 7. It shows two simple yet powerful graphs which let you understand and interpret the results of an optimization run even if many parameters are involved.

Basic Idea behind the Graphs

The optimizer algorithm uses various parameter combinations as it walks towards an optimal value for it’s target metric. The charts display this walk to the optimum. (Everything is ordered by the target metric) when we go more to the right in the chart, we come closer to our goal: The best value for the target metric.

How does it work?

The graphs are best explained starting with the Tabular result view of an optimization run in WL7, see the Screenshots view for more information.

Click here for more information on the finantic.Optimizers Extension.

What is finantic Optimizers?
finantic.Optimizer is an optimizer extension package for WealthLab 7. The package adds some optimizer algorithms to WL7.

The Problem
Optimization becomes a challenge if there are many parameters: 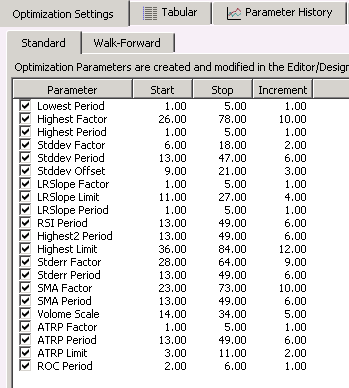 Tabular View
In the tabular view we sorted all rows by this metric. In this case the table is ordered by "APR“ as the red arrow suggests. At the same time the "Range“ column shows the associated values for Parameter "Range“ as the green arrow suggests: 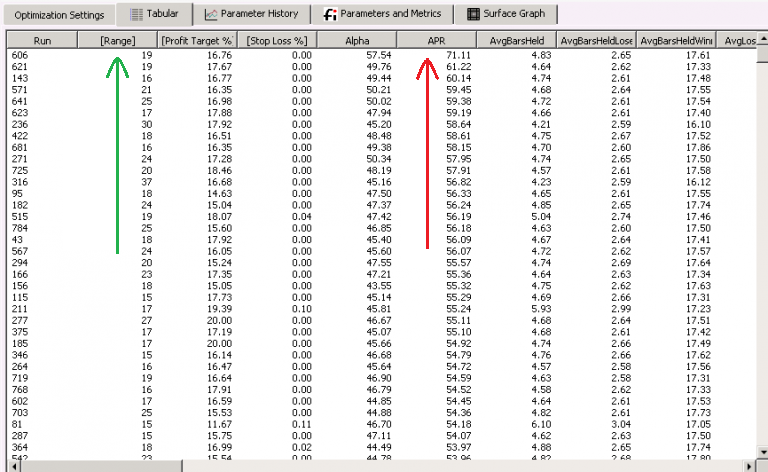 Optimization Results Visualizer
Bad values for the parameter are left, good values are right. The green arrow goes along the same values as the green arrow in the tabular view. 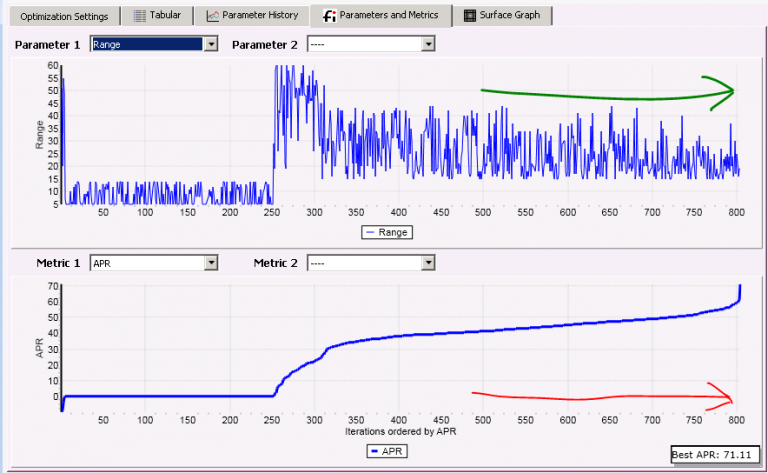 Adding a Second Metric
It is possible to show a second Metric in the lower pane. Please note that the Y-Axis for Metric 2 is on the right side of the chart. 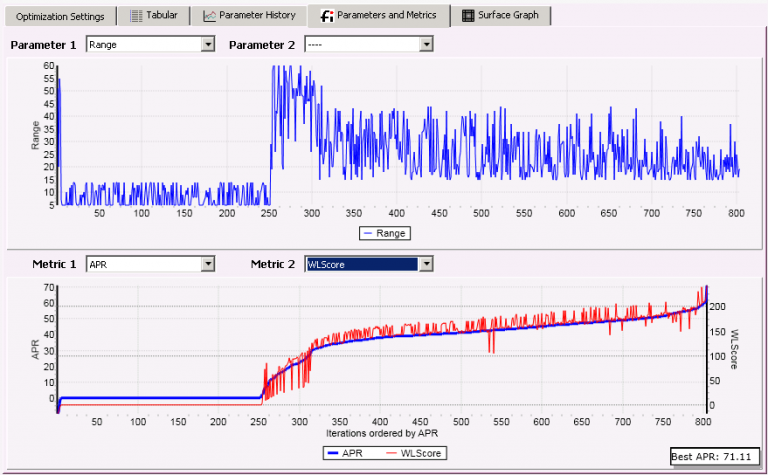 Comparing Metrics in the Upper Pane
Furthermore it is possible to show a second Parameter in the upper pane. Please note that the Y-Axis for the second parameter is on the right side of the chart: 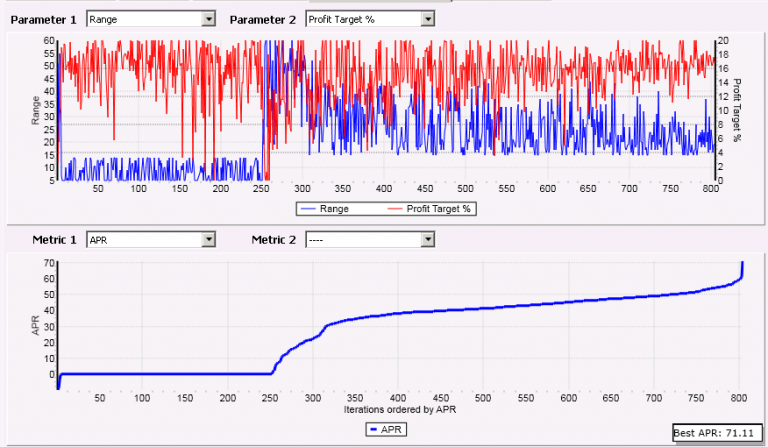 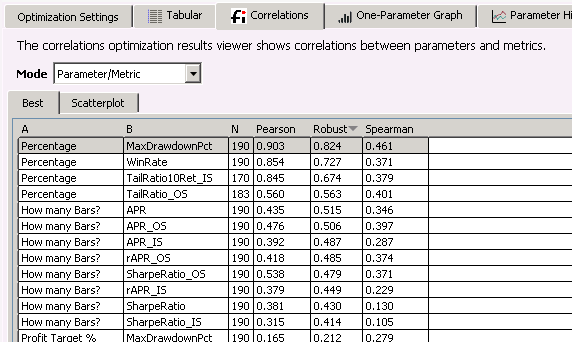 Scatterplot Tab
Shows a scatterplot for the selected pair. 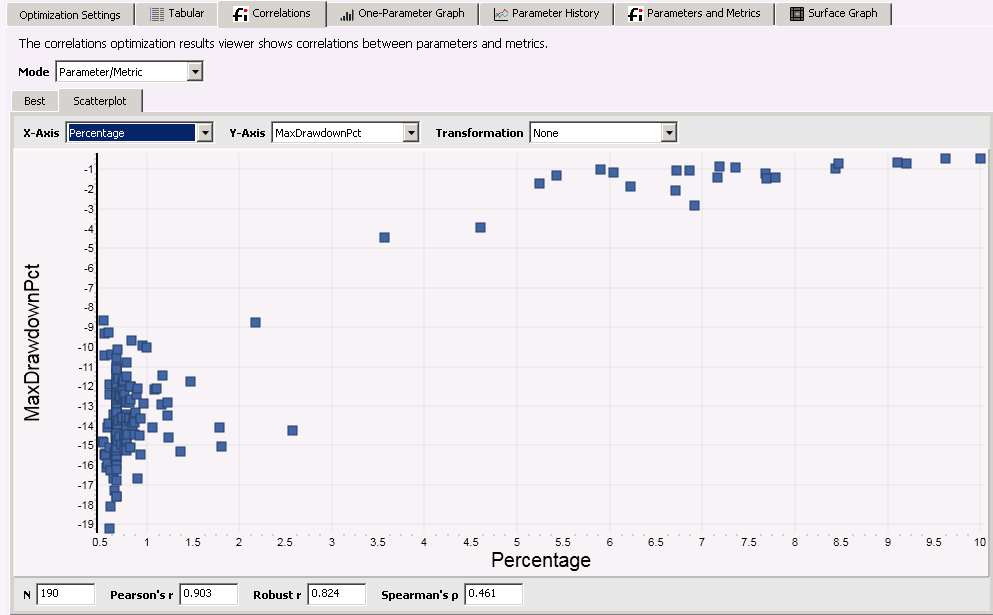 B2N (Back to Normal) Transformation
Compresses fat tails and transforms a high-kurtosis distribution to a nearly normal distribution with an excess kurtosis close to zero. Outliers are scaled closer to the average using a displaced arcus-tangens compression function. 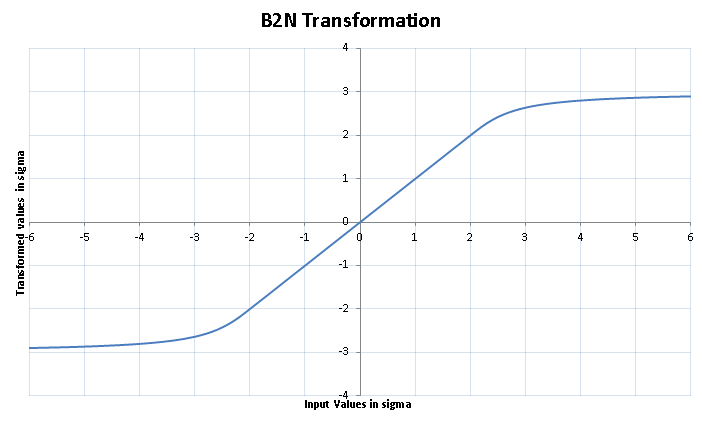