Anatomy of a Wealth-Lab 7 Strategy

A Strategy in Wealth-Lab 7 is best known for containing rules about when to buy or sell a stock, crypto, or some other financial instrument, based on its historical price data. You create a Strategy by either coding it yourself in the C# programming language, or by using some higher level editor such as our Building Block or Rotation Strategy Designers.

The WL7 framework is based on Microsoft's .NET Core framework, and technically-speaking, a WL7 Strategy is a .NET class that derives from the StrategyBase class, which is defined in the WealthLab.Backtest assembly.

As a side note, a WL7 Rotation Strategy is actually a different class, named RotationStrategy, that descends directly from StrategyBase. It maintains its own synchronization of symbols and its own processing loop internally.

The Backtester class is the WL7 workhorse, performing the backtests and collecting the results. It has a method RunBacktest which takes an instance of a StrategyBase derived class, and a list of historical data as parameters.

The diagram below shows the flow of a typical portfolio backtest in WL7. The green block shows the abstracted Backtester processes, and how it passes control to the various virtual methods in UserStrategyBase. In your Strategy class, you'll override some or all of the methods in this blue box to interact with the backtest process at various points. 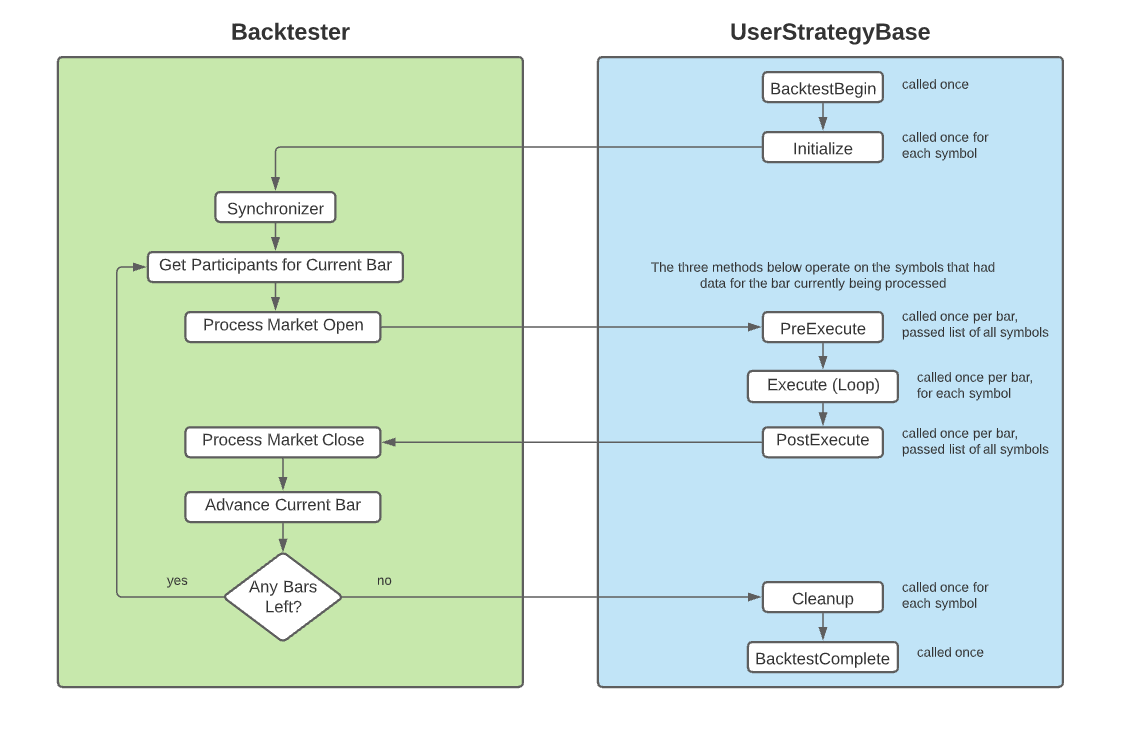 The first point of execution in UserStrategyBase is the BacktestBegin method. WL7's Backtester calls this method only once at the start of the backtest process.

WL7's Backtester calls the UserStrategyBase Initialize method right after BacktestBegin. It's called once for every symbol being backtested. Here's you typically create the instances of indicators or other objects that your Strategy intends to use later on in its Execute method. This is also a good place to Plot Indicators or TimeSeries.

At this point, the Backtester has synchronized the historical data for all of the symbols in the backtest. Each symbol might have a different start and end date, but ultimately there is one ordered list of DateTimes that represents the date range being backtested, called the master date list. The following three methods are called in turn for each DateTime in the master date list.

This method is passed a list of the symbols that contain data for the DateTime being processed. This is called the participants list.

Next, the Backtester iterates through each of the symbols in the participants list, and calls the UserStrategyBase Execute method, passing the symbol as well as the index into the symbol's history that corresponds to the DateTime being processed. It's here that you'll code the logic of your Strategy, checking Indicator values, issuing PlaceTrade calls, etc.

After all the calls to Execute are complete, the Backtester calls PostExecute, which operates exactly like the PreExecute method does above.

After the last DateTime in the master date list is processed, the synchronization loop ends. The following two methods complete the backtest process, outside of this loop.

Similar to Initialize that was called earlier, the Backtester calls Cleanup for each symbol in the backtest. This give you a chance to perform any required housekeeping or logging you might want to do on a per-symbol basis.

As a last call, the Backtester calls the BacktestComplete method. Here you can clean up any class-level static resources that you might have set up during BacktestBegin.

In programming terms, scoping refers to how accessible a variable is within your code. There are three levels of variable scoping you can employ in your WL7 Strategies:

This sample Strategy creates three counter variables, one an instance variable, one a static, and the last one a Global. It then and increments each variable by 1 in the Initialize method. Running the Strategy on the WealthData Dow 30 for the past 20 years results in 48 symbols participating, and the following output:

Armed with this knowledge, you can now code your Strategies with a clear idea of each overriden method's place in the processing flow. And, you can confidently choose a variable scoping strategy that is perfect for your needs.